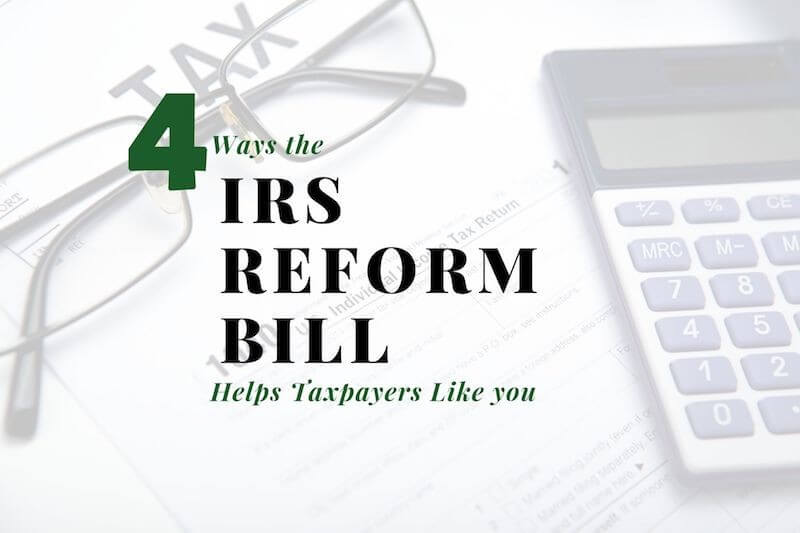 Believe it or not, 2019 is almost halfway over (!). We’re through the summer solstice, the days get shorter from here on out, and here at Team Menden Accounting & Tax Service we begin to turn our eyes more directly at 2020.

We’re pretty thrilled by the opportunity, because it means we get that much more time to take advantage of all the juicy tax-saving opportunities on behalf of our clients.

But those really are only available to those who communicate and meet with us … so don’t let this year pass without doing so: (952) 445-8753 (or shoot me back an email using the email button at the top of our site).

Moving on … there is an IRS reform bill (The TaxPayer First Act) that passed through Congress in the last couple of weeks that marks some encouraging progress towards the ability of the IRS to be more responsive to regular taxpayers (like you and me). There has been a small amount of controversy about it, so I thought I’d pipe in with some thoughts about why this might be a GOOD thing for you and me.

Four Ways the IRS Reform Bill Helps Shakopee, MN Taxpayers Like You (and Me)

“Sometimes the only answer people are looking for when they ask for help is that they won’t have to face the problem alone.” -Mark Amend

On June 13th, the Taxpayer First Act (TFA) passed through the Senate. As of this writing, it still awaits the President’s signature, but it looks as if it will be signed and confirmed.

If this doesn’t seem like much of a big deal, here’s a brief but powerful fact:

The TFA is the first significant piece of legislation addressing the workings of the IRS since the IRS Restructuring and Reform Act signed in 1998.

Twenty years later and it’s time for a change.

But if you’re in the dark as to what changes are heading your way, allow me to provide four ways this bill can help you in the months and years to come.

When thinking about the IRS, the term “customer service” isn’t exactly what first comes to mind (at least, not in a good way).

But one goal of the TFA is to tip the customer service scale in a more favorable direction. At the top of that list? The IRS is now required to devise a “customer service strategy” which they can then instill in each employee.

Simply put, more focused training in this area for IRS employees will only benefit Shakopee, MN taxpayers like you should any interaction arise. This component of the law will be a great way to take an unfortunate stigma and turn it around for taxpayers for years down the line.

In the event you have to appeal an IRS decision, the TFA changes will also benefit your case. There is a newly-appointed independent appeals office that would be available, which would allow for greater access for taxpayers to view the case against them.

This adds a new level of transparency and communication to the whole tax dispute resolution process.

Specifically, PCAs will not be able to collect from any taxpayer with a gross income of 200 percent below the poverty level.

The TFA follows suit with a nationwide, technological pursuit of greater identity protection.

Under the new provision, taxpayers who have had their identity stolen can request an Identity Protection Personal Identification Number (IP PIN). The IP PIN is a preventative measure to stop criminals from accessing items like taxpayer Social Security Numbers.

In turn, the IRS will assign a worker to the individuals with IP PINs so that their case can be filed unto completion.

These are just a few improvements that Shakopee, MN taxpayers like you can expect to see under the TFA.

But if you have any question moving forward, please let me know. I would love to sit down and discuss other ways the TFA might affect your filing. For now, take heart in these promising changes, and know there are people trying to make filing easier for you.

I would love to help do the same.

More from my site

R MendenFour Ways the IRS Reform Bill Helps Shakopee, MN Taxpayers Like You (and Me)06.25.2019
Click Here For Our 2019 Free Reports

New Strategy Posts for your Finances

Menden Accounting & Tax Service is an established full service accounting firm. Our professional staff has successfully served companies of all sizes for over 11 years. Always involved in the community, we offer hometown, personal, dedicated service and flexible hours. No job is to big and no job is too small we serve them all.

Our lobby will continue be closed to the public including suspending all in person client meetings until further notice. We are making this decision to ensure the safety, health and wellness of our team and our clients. Please be aware, our team is still working and is available by phone or email.

If you are needing to get documentation to us, we have the following options available:

We appreciate your continued trust and loyalty you place in our team. We wish all of our clients and their families good health, patience and peace in these stressful and continuously changing times.

The Team at Menden Accounting